You are here: Home / Igbo Language

Overview. Igbo is one of the major languages of Africa and one of the three principal ones of Nigeria together with Yoruba and Hausa. The Igbo live in the southeastern part of the country and are one of its largest ethnic groups. They probably originated somewhat north of their present location, at the confluence of the Niger and Benue Rivers, around the ninth-tenth centuries when their earliest works of art appeared. They didn’t have political unity and lived in autonomous local communities. The first contact with Europeans came in the mid-fifteenth century with the arrival of the Portuguese and the British. The latter ultimately colonized the country and after the independence of Nigeria the Igbo developed a sense of identity and tried to secede unsuccessfully in 1967 as the independent nation of Biafra.

Igbo is a tonal language and has vowel harmony as well as consonants with double articulation. Nouns are invariable but verbs take prefixes and suffixes to mark aspect and tense. Word order is, like in most Benue-Congo languages, subject-verb-object.

Distribution. Igbo is spoken in southeastern Nigeria, primarily in the following Southern Delta region states: Abia, Anambra, Ebonyi, Enugu, and Imo. It is also spoken in the northeast of the Delta state and in the southeast of the Rivers state.

Speakers. Around 24 million. Close to one-sixth of the population of Nigeria.

Status. Igbo is an official language of Nigeria. Also is used as a second language in Igboland. Igbos are usually bilingual, speaking English as well.

The language has between 20 to 30 dialects. The major division is between the Onicha group in the north and the Owere group in the south. Since the 19th century there has been several attempts to develop a written standard language, starting with Isuama Igbo (1857-1905) and continuing with Union Igbo (1905-41), Central Igbo (1941-73), and Standard Igbo (1973 to present).

1777. Geschichte der Mission der Evangelischen Bruder auf den Carabischen (History of the Evangelistic Mission of the Brothers in the Caribbean), written by a German priest, includes some words and phrases in Igbo.

1789. The Interesting Narrative of the Life of Olaudah Equiano, the autobiography of a former slave, includes 79 Igbo words.

1857. A prayer book in the Isuama dialect compiled by Bishop Samuel Crowther, a former Yoruba slave who became a renowned linguist.

1932. Omenuko, a short novel by Pita Nwana, is the first non-evangelical text in Igbo.

Syllable structure: Igbo syllables end in a vowel or m. The most frequent are V, CV and CVm. Each syllable has a distinctive tone.

Vowels (8). Igbo has eight vowels that are divided into two mutually incompatible sets. The advanced tongue root vowels (ATR+) are pronounced by moving the base of the tongue forward (with expansion of  the pharyngeal cavity) being perceived as “tense” or “bright”. In ATR- vowels the tongue remains in neutral position. The ATR+ vowels are i, e, u, o, and the ATR-  vowels  ɪ, a, ʊ, ɔ. Igbo has also long vowels.

Consonants (28). The consonantal system is distinguished by two types of secondary articulations: labialized velars and labial-velars. The latter are in transition to become implosives. Many southern dialects have developed aspirated stops contrasting with non-aspirated ones.

Tones: Igbo has three tones, high, mid, and low, which are phonemic, serving to make lexical, grammatical and syntactical distinctions. The mid-tone can only follow a high-tone and, in consequence, is absent in monosyllables.

The official Igbo orthography, known as Onwu, established in 1962, uses a Roman script of 36 monographs and digraphs. Their equivalence in the International Phonetic Alphabet is shown between brackets:

-long vowels are marked by doubling.

-tones are not normally marked.

-three vowels are differentiated with a dot mark: [ɪ] is represented by ị, [ɔ] is written ọ, [ʊ] is written ụ.

Igbo has a rich derivational morphology but little inflection, particularly at the nominal level. 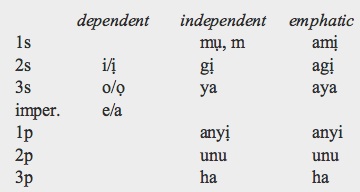 Igbo is a typical Subject-Verb-Object language. It is head-initial and, in consequence, genitives, quantifiers, demonstratives and some adjectives follow the noun (but some adjectives precede it). There is a single all-purpose preposition (na/la).

Igbo has, like many other African languages, ideophones which are a special class of words with particular sound characteristics associated with vivid sensory or mental experiences.

Three famous Igbo writers use English as their medium: Christopher Okigbo, a poet, and  Cyprian Ekwensi and Chinua Achebe, authors of short-stories and novels (see English literature). The following works are written in Igbo.

Scroll to top
× Chat on WhatsApp