You are here: Home / Lagos, Nigeria

Get translation services in Lagos, Global companies that work with us, on average, increase their sales by 48.6%. Investment into document, website and software translation to expand the reach into Spanish, Russian, Italian, Portuguese, Japanese French and Chinese communities has one of the highest yields and returns in your marketing mix.

With over 10 years of experience and consistent dedication to our customers, Novatia translation service in Lagos, has become one of the most innovative and reliable translation companies in Lagos. We have built our translation services in Lagos on the founding principles of quality, integrity, innovation and customer satisfaction, and we continue to live up to those principles today.

We take what we do very seriously. For us, translation services in Lagos is not just about changing words from one language to another. It’s about conveying the true meaning of those words, in all its subtleties, so that the translation is inherently adapted to its target audience and localized for demographics, culture, and subject matter.

WHY CHOOSE OUR TRANSLATION SERVICES IN LAGOS?

Our translation team is comprised of in-house and freelance linguists, translators, proofreaders, translation quality assurance managers, and web programmers with a solid professional background in language translation and interpreting. We only use native translators to ensure accurate localization, and each translator that works for us undergoes a strict screening process in order to keep our standards of quality high. Our translators focus in the fields of hr employee handbooks, medical, technology, legal and patent translations to ensure that even specialized documents retain the proper professional language and tone.

For legal and certified documents, we also offer certified translations  into English which include a certification letter that is stamped and signed by an official notary, and are accepted by government and professional associations across the country. We cater to individuals and all types of companies alike, ranging from small businesses to Fortune 500 companies around the world.

Our award-winning translation service have expanded to include transcription, voice-over recording, remote video interpreting, over the phone interpretation in order to provide our customers with a convenient “one-stop” solution for all of their language needs. Just like our translation service, every transcriptionist, voice-over artist, and interpreter undergoes a strict screening process to ensure only the highest quality service is provided.

The Island is a loose geographical term that is used to define the area of Lagos that is separated from the “mainland” by the main channel draining the lagoon into the Atlantic Ocean, which forms Lagos Harbour. The Island is mainly a collection of islands that are separated from each other by creeks of varying sizes and are connected together by bridges. The smaller sections of some creeks have been dredged and built over. This part of Lagos is the area where most business activities and entertainment events in Lagos takes place. It also houses most of the upscale residential areas in Lagos. The Local Government areas that are considered to be in the Island include Lagos Island, Amuwo-Odofin, Apapa (sometimes also regarded as being on the mainland), and Eti-Osa. The major upscale island neighbourhoods within these LGAs include Ikoyi and Victoria Island. Three major bridges join the island to the mainland. They are the Carter Bridge, which starts from Iddo; the Eko Bridge (formerly called the Second Mainland Bridge); and the Third Mainland Bridge, which passes through densely populated mainland suburbs to the Lagos Lagoon. 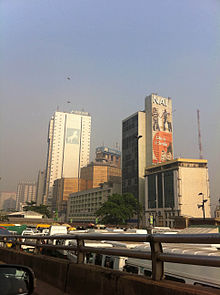 Lagos Island contains a central business district.[60] This district is characterised by high-rise buildings. The island also contains many of the city’s largest wholesale marketplaces (such as the popular Idumota and Balogun Markets).[61] It also has the National Museum of Nigeria, the Central Mosque, the Glover Memorial Hall, Christ’s Church Cathedral (CMS) and the Oba‘s Palace (Iga Idunganran).[62]Another major part of Lagos Island is Marina. It borders around the idumota and Balogun markets and houses major Banking institutions. Though formerly in a derelict condition, Lagos Island’s Tinubu Square is a site of historical importance; it was here that the Amalgamation Ceremony that unified the North and South protectorate to form Nigeria took place in 1914.

Ikoyi is situated on the eastern half of Lagos Island and joined to it by a land fill.[63] Ikoyi is also connected to Victoria Island by Falomo bridge, which carries a main road over Five Cowrie creek.[64] Ikoyi housed the headquarters of the federal government of Nigeria and other buildings owned by the government, including the old federal secretariat complex. The complex today is on reestablishment.

In Ikoyi there are military and police barracks, a top-security prison and a federal high court of Nigeria. Ikoyi also has a number of hotels, night clubs, a recreational park and one of Africa’s largest golf courses. Originally a middle class neighbourhood, in recent years, it has become a fashionable residential enclave for the upper middle class to the upper class. There are also commercial activities in Ikoyi, which is spotted in increasing number of offices, banks, and shopping complexes. The commercial section is concentrated in the South-West. 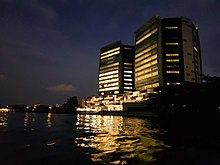 Victoria Island with its annexe is situated to the south of Lagos Island.[58] It has expensive real estate properties and for that reason, many new luxury condos and apartments are blooming up everywhere. Along with Ikoyi, Victoria Island occupies a major area in Lagos that boasts of several sizeable shopping districts. On its sea shore along the Atlantic front, there is environmentally reconstructed Bar Beach.

Across the main channel of the lagoon from Lagos Island, there is a smaller settlement called Iddo. Iddo is also a railroad terminusand it is now situated in the Lagos Mainland local government area after it was connected to the mainland like a peninsula.[65]

A huge population of Lagosians also live on the Lagos mainland, and most industries are located there. The mainland is known for its music and nightlife, which used to be located in areas around Yaba and Surulere. However, in recent years more night clubs have sprung up on the Island, making the Island (particularly Victoria Island) the main nightlife attractions. Mainland LGAs include Surulere, Ajeromi-Ifelodun and Lagos Mainland. Metropolitan Lagos suburban LGAs include: Agege, Apapa, Mushin, Oshodi-Isolo and Ikeja (site of Murtala Muhammed International Airport and the capital of Lagos State).

Major Areas on the mainland include Ebute Metta, Yaba and Ejigbo. Some rivers, like Badagry Creek, flow parallel to the coast for some distance before exiting through the sand bars to the sea.